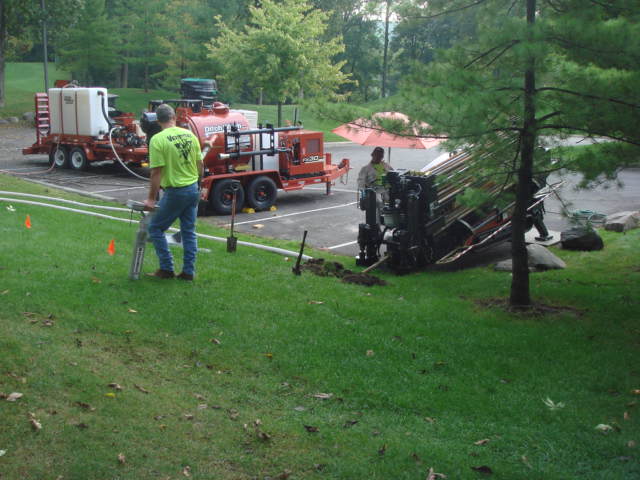 The term ‘trenchless technology’ is a drilling application that we don’t often associate with geothermal loop installations . . . but we should.

Given advancements in horizontal boring equipment over the past few years, this technique has become both an economical and feasible option when it comes to installing geothermal loops and has earned its place in the geothermal space.

When I think of trenchless technology, what immediately comes to mind is the running of natural gas lines, fibre optic or utility cables. Horizontal boring is ideal for this purpose because the cables can be run under existing obstacles and roadways with minimal disruption to the land. That’s what makes this approach so effective for the laying of high density polyethylene (HDPE) geothermal pipes.

In the past, I have referred to the open and closed loop systems commonly used for laying the HDPE geothermal pipes that feed into the heat pump. Open loop systems are commonly used on properties that have an existing water well, while closed loop systems refer to a continuous geothermal loop that is placed in the ground either horizontally or vertically depending on the expanse of the property. Water runs through the loop in perpetuity extracting or rejecting heat to the ground as needed.

Consider the urban homeowner who wants to leverage the benefits of geothermal technology to heat and cool his house. His house sits on a heavily landscaped piece of land. This would appear to rule out a traditionally excavated horizontal closed loop system given a 5-ton geothermal system would require a minimum of 5,000 square feet of ground space to bury the pipe. The option we would then tend to lean towards is a more expensive vertical closed loop system because it allows us to install the length of pipe needed to ensure maximum heating and cooling efficiency in a much smaller area. It does, however, require between 900 – 1200 feet of drilling to accommodate about 1800 to 2400 feet of continuously looped HDPE pipe.

And what about the rural homeowner who doesn’t have well access and whose home is situated on two acres of treed land? While a horizontal closed loop system would appear to be the best option given the land mass available, the homeowner has dense bush on his property and doesn’t want it disturbed. So what now?

There is an option to fulfill both these homeowners’ needs. It’s horizontal boring.

These compact and powerful machines are flexible enough that they can handle both urban and rural landscapes given their capacity to bore holes into the overburden over significant distances. You can control the direction of the boring head to pinpoint accuracy leading to minimal surface disruption.

Like minimally invasive surgery, horizontal boring is practically invisible to the naked eye. The start and end holes in the ground are small and have little impact on the property. It’s the least invasive and most reliable way you can effectively install geothermal pipe.

The deeper you bore diagonally into the ground before boring horizontally, the higher efficiency you will generate for the heat pump. In horizontal closed loop systems, we normally bury the HDPE geothermal pipe evenly spaced in a series of parallel six foot deep trenches. To achieve the same performance using horizontal boring, we need to go down a minimum of nine feet because the pipes we’re laying into the bore will be next to each other rather than spaced. We can achieve increased performance with two pipes together in a bore hole at ten or more feet of depth surpassing an open trench horizontal closed loop system that lays pipe two feet apart in six foot deep trenches.

Horizontal boring can easily and effectively bypass existing utility systems below the ground like power, water, sprinkler and sewage lines. For instance, we recently installed 48 horizontal 500 foot bores under an existing golf course without interrupting regular club play.  Once the horizontal tunnel beneath the ground had been bored, the same machinery was then used to pull the 1000 foot lengths of HDPE pipe back between the starting and ending holes. The space between the pipe and ground of the bored out tunnel is then filled with bentonite grout mixture to seal it in place and provide maximum thermal conductivity.

During the golf course geothermal installation we successfully drilled 16 such holes underneath the golf course and sprinkler systems at the 10 foot level.  An additional 16 bore holes were to go at the 20 foot level but unknown obstructions about 180 feet out caused us to change our plans and simply bore the loops at the 30 foot levels instead.  The last 16 bores were then located at the 40 foot depth to complete the project. When all was said and done, the small holes we drilled merely looked like divots. Covered with grass, no one was the wiser that we’d even been there installing more than 15 kilometres of 1.25” PE100 pipe.

Horizontal earth boring offers an appealing alternative to home and business owners who are seeking minimal surface disturbance with installation. In the case of the urban homeowner, we can drill beneath common areas, where permitted, to generate the linier footage required to install geothermal pipe horizontally without the excessive disruption to the land’s surface. And in the case of the rural homeowner, we can complete the installation without disturbing the trees on his property. Of course the horizontal boring is not limited to closed loops and can be used to run open loop and domestic water lines from the well head directly into the customer’s basement or mechanical room.

Depending on your needs, new and used boring systems can include tooling, boring, tracking, grouting and vac setups and run between $60,000 bare bones and $280,000 fully loaded.

As always, it’s important to select the right loop system when installing geothermal systems based on the home or business owner’s needs and what will ensure maximium heat pump efficiency over the long-term.  If the equipment is available and ground conditions allow, consider horizontal boring as a viable option on your next geothermal installation.

Stan Marco is a well-respected and highly sought after geothermal knowledge expert and educator. He is an active member within the ground water community, is a board member with the Canadian GeoExchange Coalition and is Co-founder and CEO of GeoSmart Energy & GeoSmart Drilling Services.